On this page of guide Fallout 76 Wastelanders, we will be interested in the complete progress of the Ally Side Quest: Air Crash.

By exploring the quagmire area, you pick up a distress signal and this quest begins (pictures1and2).

Go to the abandoned bunker in the northern part of the quagmire (pictures3and4).

Explore the bunker to meet Commander Daguerre (picture5). Give him a stimpak, then agree to help him retrieve a black box from the crash site. 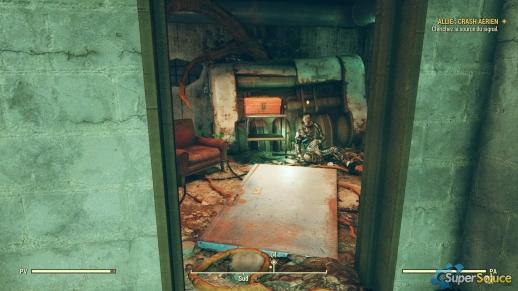 Exit the bunker and head south to reach the crash site (pictures6and7).

Interact with the black box (picture8), then repel the enemies until the end of the countdown (picture9). Then take the black box and bring it to Sophia Daguerre.

During the discussion, Sophia tells you that you need to retrieve an encryption key from a robot. If you have at least 8 intelligence points, use the dialogue option to obtain the “Blue Twilight” emergency code (picture10). Now follow the marker and eliminate the robot or talk to it using the emergency code (pictures11and12).

Go back to Sophia, and offer her to join your CAMP (picture13). Return to your CAMP and build a USSA console to end this side quest (picture14).