In this part of the solution Fallout 76 Wastelanders, we are going to reveal the complete progress of the side quest Ally: An eagle finally free.

After completing the side quest Ally: Escape on the wire, talk to Beckett in your base (picture1). You have to help him by bringing him various items, eliminating some specific bandits or freeing some characters. All objectives are marked on your map to help you. After completing an objective, return to Beckett to get another one. 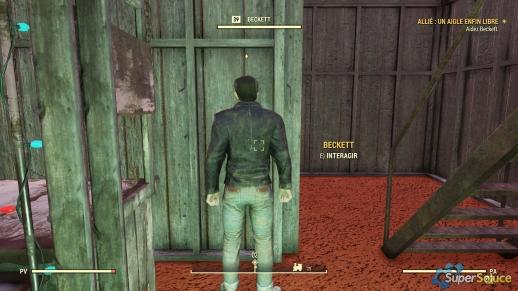 Here are the objectives and locations you need to explore to advance this quest:

Ally: Naughty Little Secrets
Go to the Court of Miracles (picture2), and take Edwin’s diary from the locker (picture3).

Ally: Out of tune
You must now go to the treetops (picture7). Climb to the top of the tree to retrieve Edwin’s key from the trunk (pictures8and9).

Ally: The Death of a Traitor
You must now go to Ingram Manor (pictures10and11). The only thing to do here is to kill Bronx (picture12).

Ally: Supply and Demand
Go to Hawke’s Refuge (picture13). Enter the cave and take the buffout supply from the trunk (pictures14and15).

Ally: Golden Robot
You must now go to the Garrahan Mining headquarters (pictures23and24).

Ally: Brotherhood Hack
You must go to the observation post (picture27). Kill all the bandits and take the Frankie eye subject from the travel bag (picture28).

Ally: The Needs of the People
Go to the ammunition dump and take the poison supply from the locker inside the caravan (pictures29,30and31).

Ally: Eye for an eye
You must now go to the Scarlet Pupil (pictures32and33). On the spot, eliminate the bandit named The Eye (picture34). When this last objective is accomplished, return to Beckett to end this side quest.

add a comment of Ally: An eagle finally free