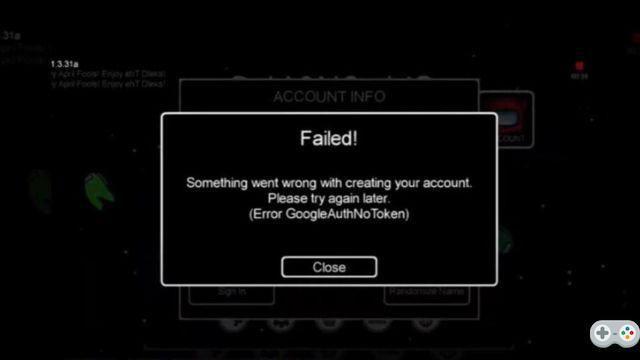 Among Us is a multiplayer game available on PC, Switch and iOS and Android mobiles which made a significant update this Thursday, April 1st and which added new features to the title of Innersloth.

However, since the release of this patch, some players on Android are encountering an error message " Error Google Auth No Token which is due to an authentication problem when you log in to the game.

How to solve the "Error Google Auth No Token" problem on Among Us?

When you are going to launch Among Us on your Android mobile, you are prompted to sign in via Google Play Services. This facilitates the connection, but also helps to create an account on the game.

However, by making this choice, you risk encountering this error message. At the moment there is no solution to solve this problem, but the developers are aware of the bug and are working to fix it.

A bug that may take some time to resolve since the developers have announced that they are awaiting a response from Google in order to work on fixing it as they stated in their game bugs document (source).


However, the problem does not prevent you from playing since you will be able connect to Free chat by logging in with a guest account. It should be noted that with such an account, you will not be able to choose your nickname.

Among Us sheriff mode: how to install and play it?