New map Among Us The Airship, presentation of the new map Find in this guide a detailed map of everything you need to know about the new map The Airship on Among Us.

The Airship is the fourth card long awaited by players ofAmong Us and it is finally available for all players since this Thursday, April 1.

As you can imagine from the name, this level takes place aboard a fairly spacious airship which contains no less than 17 rooms in total.

The Airship sur Among Us, nouvelle map

La new map is finally available, and a trailer has been released, in which we can already discover it:

If you want to know where the tasks are, the winds, but also all the rooms, Acron and Jack Benci have realized full map available below. 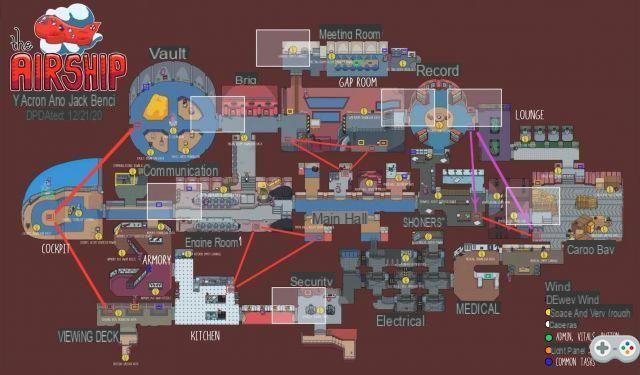 As you can see, it is divided into several rooms.

The transition from one room to another is also simplified with the presence of ladders and platforms. New tasks are also available.

It should be noted that on this new map, the tamper alarm is slightly different and could disturb you during your first games. What's more, you will now be able to choose the room where you will reappear after an emergency meeting.

To be able to play it, download the game update now, which will give you access to some new features, such as new skins, hats and the new map. An account system has also been added to the game!

Why isn't Among Us working?

Among us server status, how to know the status of the servers?

add a comment of New map Among Us The Airship, presentation of the new map