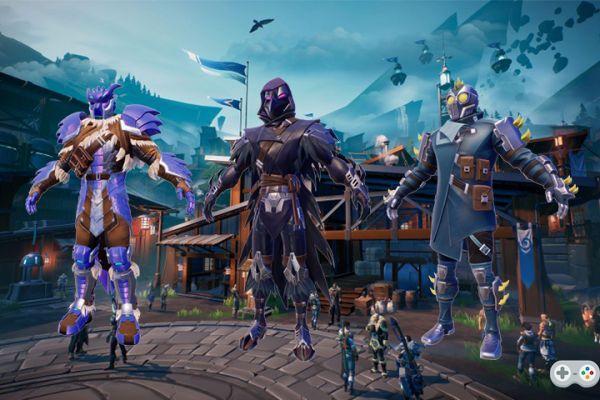 Dauntless: Best Dauntless Armor In Dauntless, armor plays an important role, we are going to give you our opinion on the best armor for each element.

L'Nayzaga armor is the only armor with a bonus of +6 Medic. This skill allows you to revive your teammates more quickly, a very interesting bonus, but to have it at +6, you will however have to raise your armor to at least level 10.

If you are not interested in the complete set, you can at least do the helmet and the torso since these are the two elements that have this bonus. As for the other two elements of armor, boots and gloves, you will have the skills Aether Harmonization et Insulating. These two bonuses offer you the possibility of recharging your lantern for the first, while the second offers you the possibility of attacking electric shields.

L'Koshai Armor grants the most aggressive offensive type bonuses. With this set, you will probably cut the Behemoths at high speed, since you have the bonuses on it Agility which reduces the stamina cost of dodges, an advantage which synergizes perfectly with the other two, Evasive Fury which temporarily increases your attack speed following a dodge and Predator which increases your damage if you haven't taken damage for 15 seconds.

If, on the other hand, you are looking for ultra-defensive armor and arguably the best tank armor, then theSkarn Armor is made for you. Equipped with 4 slots for defensive cells, you can have fun optimizing your tanking option.

It has the most interesting bonuses defensively speaking since it is equipped with guardian which grants a +10% bonus to any shield applied to you and is also applied to your nearest ally for 15 seconds, from Fortress which applies this famous shield if you have not received damage for 10 seconds and Robustness which increases your life points.

Coupled to Lernean, which you can equip in the free slots, you will have a higher chance of reducing the damage received. A perfect armor for tank-oriented players.

L'Shrowd armor is undoubtedly the classiest armor in the game. With a very pleasant look, the armor has interesting bonuses such as a +3 in Doctor, a +6 bonus to Rage and from +3 in Nine Lives from level 10.

Rage will offer you the possibility of doing additional damage depending on the number of your missing hit points, and Nine Lives allows you to reduce the damage received, but also gives you a chance to escape death.

Probably the hardest set to get since the Rezakiri members' hitbox is very complicated, but if you manage to get the complete set for theRezakiri Armor, you will get very attractive bonuses.

The three set bonuses are Driving which grants you a temporary attack speed bonus by pressing the button of your lantern, Agility which reduces the stamina cost of dodging and Critical Strike which gives you a chance to double the damage dealt. A damage-oriented set that also has a very nice appearance.

Unlike the offensive-facing Rezakiri Armor, theEmbermane Armor will be defensively oriented. The complete set will offer you three interesting bonuses such as: Evasive Fury which increases your attack speed following a dodge, Fire retardant which increases your protection against fire damage and Improved evasion which makes you invincible during a dodge. However, if the set seems complicated to you, make the boots, the breastplate and the helmet to offer you excellent protection.

L'pangar armor is undoubtedly the most balanced armor in the game. It is particularly suitable for Ax fans.