FIFA 22 FUT Champions: Format, Rewards, Rankings and How to Qualify for Playoffs and Finals 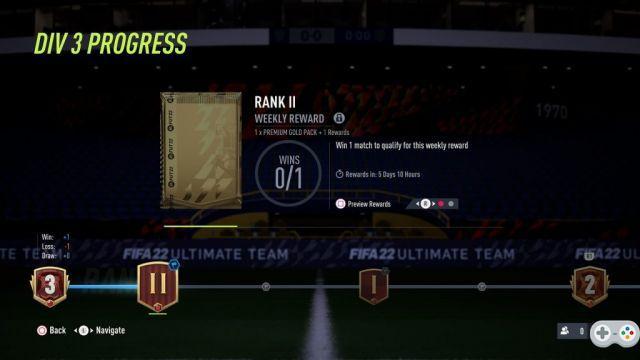 FUT Champions is set to return to FIFA 22, with a new two-stage format, ranking system, and more rewards to play for.

The release of FIFA 22 as Early Access for EA Play users has brought a large wave of gamers, eager to experience all the new features this installment has to offer.

While some of these focus on aspects such as gameplay and game aesthetics, one of the biggest has been for FUT Champions, a mode where players from around the world compete each week for prizes. valuable price and competitive prestige.

Although since its arrival this game mode has been one of the most relevant in competitive FIFA, it has been the target of much criticism due to its grueling format, which required users to play up to 40 matches. in just three days, just to try their luck. to finish in a good rank and earn better rewards.

Thus, with the launch of FIFA 22, FUT Champions has undergone a complete overhaul in its format, becoming a competition divided into two main stages: Champions Play-Offs and Champions Finals.

Champions Play-Offs: Format, how to qualify and rewards

In previous FIFA installments, all players could qualify directly for the Weekend League by playing a series of matches in Division Rivals, earning a certain number of points needed to secure their spot.

Now, with the arrival of this new format, every Division Rivals game you play will help you earn Champion Qualifying Points based on your current Division. Each victory will earn you the following points:

Once you have accumulated 1 points, you will automatically qualify for the Champions Play-Offs.

In Champions Play-Offs, you will have to play a series of nine matches which will determine your ranking, as well as the rewards you can obtain and in the best case, qualify directly for the Champions Finals.

Each victory in this phase will earn you four points, and in turn, each defeat will only earn you one point. Below are each of the rewards, along with the points needed to qualify for each rank:

If you finish between Ranks 1 and 2 and get the Champion Finals Qualifier Token, it can be used on any weekend you choose, giving you better options in case you want to try and get a specific red player choice.

The Champions Finals will have a format quite similar to the Weekend League in FIFA 21, however, all qualifiers will only have to play a total of 20 matches throughout the weekend.

One of the biggest changes will be to the new tiers in this stage, as instead of being tiered from Bronze to Elite, Champion Finals will have six tiers with various in-game rewards.

Once all our matches have been completed or the Champions Finals period is over, you will get all your rewards instantly. So if you go through all 20 matches in one session, you can get your prizes faster rather than waiting for Monday.

Additionally, during each FUT Season, you will have a limited number of chances to finish in FUT Champions, which means you can try to make it to the Champions Finals by returning to the play-offs after requalifying through Rivals.

FIFA 22 is set to release globally on October 1, while FUT Champions will be available from October 8.

Stay tuned as we bring you the latest FIFA 22 news from every release, breaking news, FUT tips and more.

add a comment of FIFA 22 FUT Champions: Format, Rewards, Rankings and How to Qualify for Playoffs and Finals