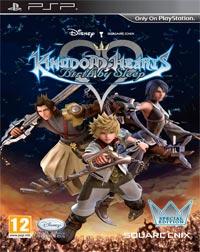 This boss is only visible on the US and EU versions of Kingdom Hearts Birth by Sleep. To find it, you must have defeated the first optional boss. Then, load a game in which you have access to the Land of Departure to witness a scene at the end of which you will face this mysterious boss.

To earn from easily experience in Kingdom Hearts Birth by Sleep quite early in each character's storyline, you need to mix the following commands to get the Walk EXP ability. By activating it, you will then automatically gain 1 experience point with each step you take. Note that other merges may allow you to achieve the same result.

You will find an abundant crystal in a treasure in Neverland for example.

To unlock the final episode of Kingdom Hearts Birth by Sleep, you must collect the 13 reports of Xehanort throughout the game with the three characters:

Once the 13 reports have been obtained, the game will offer to create a save at the end of the game screen in order to be able to play this episode.

If all 13 reports are obtained after completing the different scenarios, you will have to beat the end boss of the protagonist who collected a missing report again to be able to update the "trinity journal" via the end game save.

After completing the last episode, go to the Keyblade Graveyard to find a Dark Sphere. Examine it to face the boss secret de Kingdom Hearts Birth by Sleep.

Attend the second series of events in the world "Country of Departure".

Found in the "Deep Space" world at the place called "Exit Deck".

In a chest in the Keyblade Necropolis.

In a chest in Merlin's house in the "Radiant Garden".

Obtained after visiting the "Mysterious Tower".

Follow the directions below to unlock Kingdom Hearts: Birth by Sleep secret ending :

You play in Standard mode :

As standard, you'll need to complete all Kingdom Hearts: Birth by Sleep scenarios and complete all character journals.

You are playing in Expert/Critical mode:

In Expert and Critical you will have to complete all the scenarios of Kingdom Hearts: Birth by Sleep only.

add a comment of Tricks Kingdom Hearts : Birth By Sleep