Five Nights at Freddy's is a game leaving a large part to chance, however, it is possible to maximize its chances of success through a good knowledge of the different automata. Here you will find some tips for every enemy looking to kill you.

Girl : Moves very quickly and always spawns at the right door. If you see her on the corresponding camera, immediately close the door.

Bonny : Moves randomly through the cameras but always attacks through the left door. If you think Bonny is moving, turn the light on and off quickly to find out.

Foxy : Mainly stays in Pirate Cove but doesn't enjoy being watched very much. if you hear him running, immediately close the left door.

Freddy : Freddy moves mainly following the path of the cameras. So try to observe it regularly in order to slow down its speed of movement. Finally, remember that Freddy can destroy doors, so it's essential to slow him down until the last hour of the night.

Energy management is essential in the success of a run in Five Nights at Freddy's, it is therefore necessary to be vigilant at all times so as not to find yourself in the dark.

To save yourself trouble, all you have to do is never close the doors, unless an automaton is nearby. In this situation, close the door quickly and leave it locked until the monster disappears.

Dance Five Nights at Freddy's, it is possible to summon Golden Freddy, a golden and seemingly older version of the current Freddy. You can spawn it on all nights of the game, but it seems to be easier to achieve it on nights 1 and 3.

To make him appear, switch to camera 28 and look for the poster of Freddy singing. From there, switch to another camera before returning to camera 28 until you see the change made on the poster. Instead of a singing Freddy, you'll need to see Freddy's head close-up.

All you have to do is close your computer (without changing the camera) to see Golden Freddy appear in front of you. 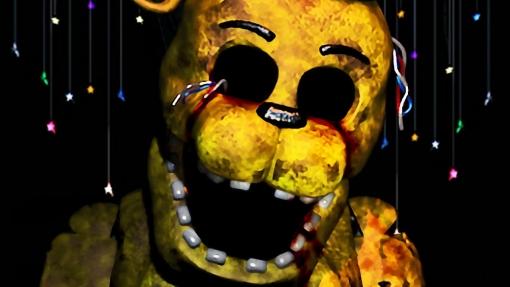 add a comment of Tricks Five Nights at Freddy's