Cutscene: The Bandersnacth takes you to the entrance to Ansécarlate in the Red Desert. Alice thanks him before he leaves. You have to go to Marbreroi to meet the White Queen. The chat can help you take a shortcut to Marbleking, behind the tree of Ud and Moyorient via the Hall of Doors.

You have 3 chests and a big chest. Make a door appear between the chests (picture 1). Open it and enter.

The Hall of Doors

Come on. Jump the stream. Continue to the clearing. Vortices appear and red guards come out of them (picture 3). Beware of the heart surrounded by thorns! If you touch it, your health decreases (picture 4). Fight the 3 successive waves of enemies. 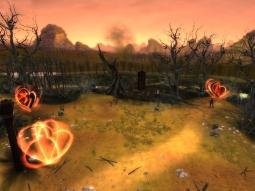 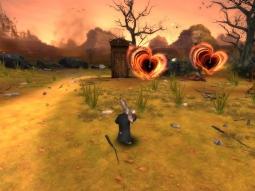 Go to the left of the door leading to Ud. Climb on the podium (picture5) and with the Hatter, try to join the 2 edges by taking the 2 trees as witnesses to make one (picture6).

Move towards the door (picture7). Open it and enter. You arrive near the clearing. Collect a chess piece (picture 8).

You arrive at the same place but the weather is stormy. In the center, you see one of the 2 brothers (image 10). Go talk to him. They were in Nowhere and Dum disappeared through a door that mysteriously disappeared. 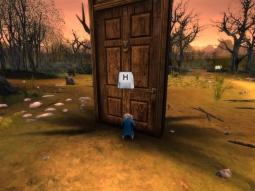 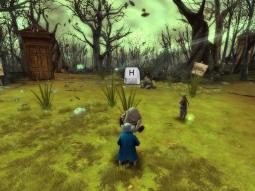 Go through the door to Nowhere (picture 11). You have an invisible door. Make it appear (picture 12). Open it and enter.

You find Dum painting a tree (picture 13). Talk to him. Dum helped the dodo get home and the dodo gave him a can of paint. Dum repaints the panels so no one gets lost. They go away.

Take the door. Stop the panel in the middle (image 14) to be able to read it. It tells you to follow Moyorient 3 times then to go Nowhere.

Follow the indications and you will have 5 chests (picture 15).

Go through the painted door (picture 16).

Go up and go to the right while clearing brushwood. Climb onto the podium at the bottom right (picture 17). Use your power to rebuild the bridge (picture 18).

Vortexes open and Red Guards arrive. Confront them by protecting Alice until the vortices disappear.

Go forward and at the end to the left, replace the fish heads on the statues. A chest appears between the 2 statues (picture 21). Turn around and go down (picture 22). 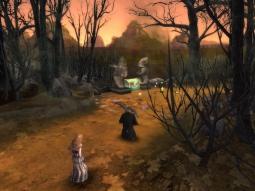 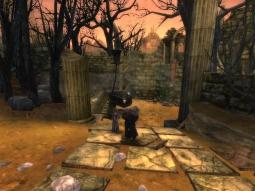 Open the door and go through it (picture 27). 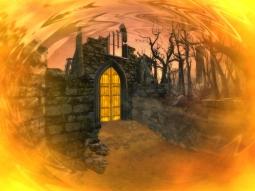 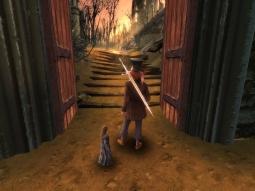 Climb up and move towards the ruins on the left (picture 28). A vortex appears. Eliminate the intruders.

Go left to see a passage (picture 29). At the end, you have a big chest. Retrace your steps.

Then go to the right of the small door (picture 30) to find a chess piece (picture 31).

Go back to the small door (picture 32). Open it and pass it. 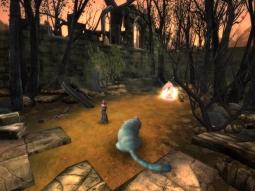 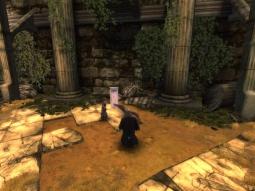 As soon as you disembark, a vortex appears. Face the 2 waves of red guards.

Further, you have 3 buried chests (under the flowers). Save (picture 33).

Go up and to the right, make the big rock to the right of the tree disappear (picture 34). Enter the cave.

On the other side of the stream, you have 3 chests. Use telekinesis to take them to your side (picture 37).

You have 3 pigs nearby (picture 38). Immobilize them and hit them. 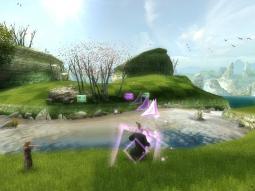 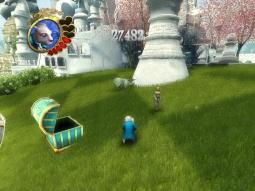 Go to the lawn to the right of the alley leading to the castle Raise 4 pieces of earth (picture 39). Jump from platform to platform and at the far left, jump onto the balcony to retrieve a chess piece (picture 40). 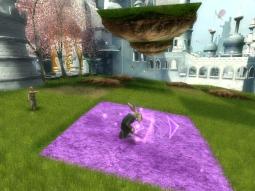 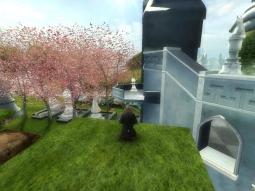 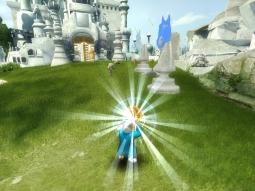 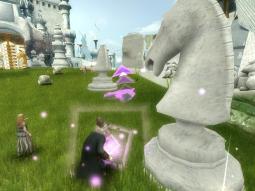 Advance to career. Throw 4 rocks at a mold (picture 45), but you can also hit the rock. A chess piece appears. Take her to her place by using telekinesis 3 times (picture 46). 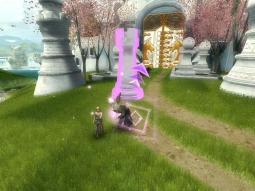 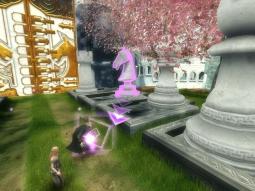 Cutscene: You meet the White Queen who welcomes you. She gives Alice a potion to return her to normal size. The White Queen affirms that this is the Alice they have been waiting for. You have the sword but the armor is still missing. The Queen tells you where to find her: in the hall of doors, there is a door closed with a white padlock. She unlocks it and then gives a card where she has written down all the secrets (chests) that you have not discovered. It indicates that Alice will be able to pass all the doors without changing size. 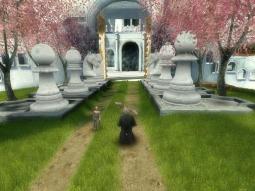 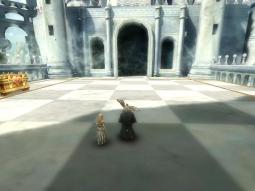