Super Smash Bross 3DS / Wii U is full of many tips and cheats that you can use to unlock challenges, collect trophies more easily or change Star Fox's music, dialogues or even obtain alternative versions of many internships. Further explanations are below:

To select alternative music, hold R when choosing your stage.

At the controls of Fox or Falco in the Corneria stage, quickly press the D-pad to trigger a dialogue with the members of Team Star Fox instead of a classic taunt.

Complete all the challenges and get the perfect game:

Inventorying all the "unlockables" of Super Smash Bros. for Nintendo 3DS, the challenge table consists of three pages of thirty-five objectives to complete in order to complete the game at 100%. As you progress in these, you will unlock small hammers (three per page) allowing you to complete a challenge without realizing it. To get a perfect game, it is therefore necessary to complete all the challenges without using any of these hammers.

There are two alternative versions of the Boxing Ring arena, respectively decorated in the colors of Punch-Out and Smash Bros., one of which is always randomly selected at the start of the fight. However, it is possible to manually choose which one will be used. To do this, hold the L button when selecting the stage for the Smash Bros. version, and the Y button for the Punch-Out version. This manipulation also works with the omega version of the stage.

To fight in the monochromatic version of the Dream Land stage, hold the L button when selecting the arena, and say goodbye to its usual green tint during a fight.

To unlock the additional rules that can be configured in the menu provided for this purpose, accumulate a total of 200 KOs in the game.

Music hidden in the menu:

To change the in-game menu music, hold the R button at the title screen and then press Start. The music from Super Smash Bros. Melee will then welcome you into the game instead of the usual.

When certain characters in the game win a fight, they are given a custom line of dialogue based on their opponent. Characters affected are Fox defeating Falco and vice versa, male and female versions of Robin defeating Lucina, Lucina defeating Marth or Ike, Palutena defeating Pit or Dark Pit, and Dark Pit defeating Pit.

Land a combo of 100 hits or more in Practice mode:

To land a combo of 100+ hits in Practice mode, select Ness, set the opponent's damage to 999%, grapple them with the L Button (default), and hit them repeatedly with the A Button (default) until reaching 100 Hits. However, be careful not to touch the analog stick, which would cause a projection and instantly end your current record.

Easily achieve a big score in the Home Run Contest:

To achieve a high score in the Home Run Contest without too much effort, select Yoshi, jump quickly towards the sandbag so that you are overhanging it and press A (default) while holding the analog stick down. Repeat the operation several times, then hit the bag with the bat loaded at full power to send it waltzing very far.

To easily destroy 300 blocks in Trophy Rush mode, select Fox, position yourself at one end of the arena, and hammer the B button (default) to fire his laser gun continuously. The boxes will be destroyed easily, and you will only have to move from time to time from one end of the arena to the other to avoid being hit by the balls of electricity coming to dislodge you from your comfortable position.

Move quickly from one end of the Balloon Fight stage to the other:

Just like in the original game, the ends of the Balloon Fight stage allow you to jump from one end of the screen to the other very quickly. To do this, you just have to jump in the direction of the outside of the screen and, if you are not hit by any attack, you will find yourself almost instantly on the other side of the arena. The Balloon Fight course is the only one to offer this opportunity.

In the Golden Plains stage, collect a minimum of 100 gold coins to allow your character to temporarily transform into a golden character, becoming much more powerful and harder to hit.

The Power Pellets in the Pac-Maze stage:

In the Pac-Maze stage, collect a minimum of 100 Pac-Dots to spawn a Power Pellet on the screen. This will boost your character's stats, including their attack strength. Blinky, Pinky, Inky, and Clyde will also turn blue and become vulnerable to your attacks, just like in the original game.

Want to unlock all Super Smash Bros 3DS / Wii U characters quickly but don't want to spend your month doing all those challenges? This tip will explain how to unlock the entire cast in less than 30 minutes for the most relentless!

Go to "Smash" mode and adjust the settings as follows (image1et2):

All you have to do is eject directly to the left or right of the level to end your match in less than 2 seconds (image3). Re-perform the same manipulation until you reach 120 matches. The video below will show you how to perform this manipulation. 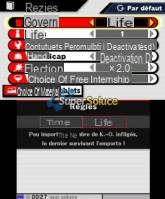 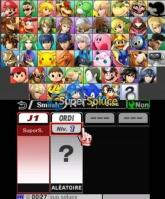 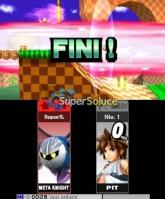 Super Smash Bros. Wii U has a number of hidden combat arenas such as the Pac-Man arena or that of Wario that can be unlocked by achieving various objectives. Here is the list of SSB Wii U arenas to unlock as well as the appropriate conditions:

All characters to unlock

Super Smash Bros on Wii U has several characters that you will need to unlock if you want to use them as fighters in the game. Here is the complete list of characters to unlock in SSB Wii U as well as the method or objectives to complete for each :

add a comment of Super Smash Bros. Tips Wii U