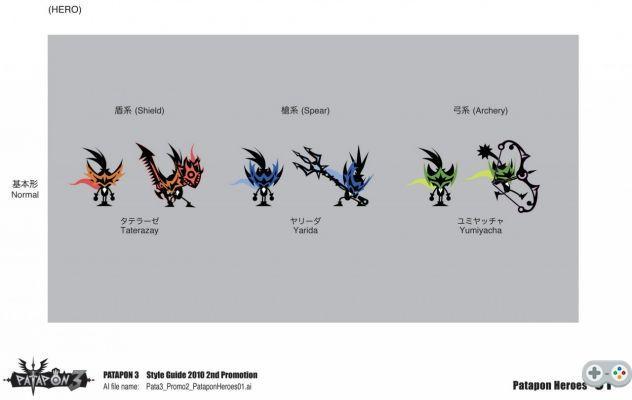 To access Fever Mode more quickly and therefore not have to perform 10 combos in a row to enter a trance, keep a perfect rhythm during your sequences.

In this way, you can activate the Fever mode with a shorter combination.

The Yumipons (warrior archers) are most effective in mode Fever !

They believe that attack is the best defense and thanks to their tirs triples, they make the enemy see it!

But even the Yumipons have their weak point. They are very sensitive to fire...

Each Patapon fallen in battle leaves a cap behind him.

Bring the cap home to revive the Patapon at Mater, the tree of Life.

If you let him, this Patapon will be damned for eternity...

Warning ! Some Bosses swallow the Patapons whole, helmets included! In this case, you can say goodbye to your warrior...

The Don drum and crossing the desert

After a few game missions, the level titled Desert crossing could well cause you some problems... We ask you to carry out the rain dance and thus to produce a new miracle. Unfortunately for you, without the drum don, impossible to satisfy this new request from the Patapons...

Leave for the hunting level and take a few steps forward only to position yourself in front of a strange Totem placed at the beginning of the level. Then perform the sequence described on this one several times in a row, namely: Triangle, Round, Triangle, Round.

Use the same rhythm as for the other chants performed in the game and collect the object that will escape from the Sacred Totem. Finish the game level and a whole new level will be accessible on the progress map: Miracle of Lostdon. Accomplish this journey there to recover the drum don and, defeat Daring Majidonga to get the key item rain miracle.

All you have to do is return to the desert level to now pass the area without any problems or almost!

To improve the performance of your hunts, make sure to always remove the Tatepons (axe warriors specialized in close combat) before going on an excursion.

The Tatepons indeed hinder your other types of warriors by disturbing the animals which then run away much too quickly.

By hunting only with your launchers and your archers, you will then have the possibility of hitting your targets from a distance for a maximum surprise effect!

The good one is yours tender meat !