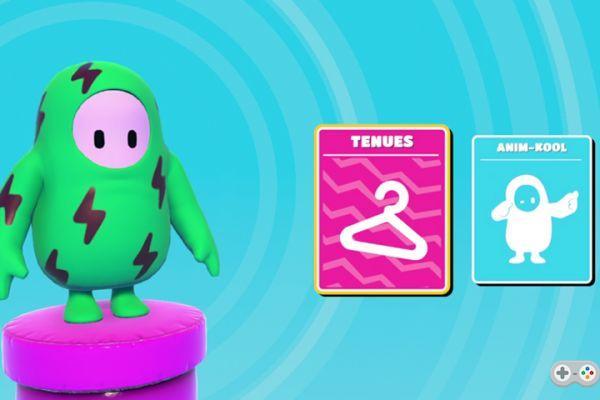 Fall Guys is the new game of the moment, which is making a lot of noise! In this very colorful and fun game, you play as the participant of a show who must participate in different events in order to finish first. Fall Guys is scheduled for release this Tuesday, August 4, 2020.

If you were able to play it, you certainly realized that it was possible to customize your character's skin, which corresponds to his Long-lasting », but also his emotes, also called « Anime Kool ". We explain to you how unlock more !

Outfits and Anim Kool in Fall Guys, how to unlock them?

To unlock Outfits or Anim Kool in Fall Guys, there is currently only one way. Simply play games to earn celebrity points (which are the equivalent of XP) and so gain levels. At each level, an award You will then be offered: outfits, kool anims, but also colors or currencies!

It is possible that subsequently some of the outfits will be purchasable. Indeed, during the beta, one of the tabs was not accessible, and strongly resembles what could be a shop. We will certainly have to wait for the official release of the game this Tuesday, August 4 to find out more.

What are outfits in Fall Guys?

In Fall Guys, outfits correspond to skins. It is a means of customize your character, by choosing different elements yourself: the color, the pattern, the face, the top and the bottom.


These outfits are always in the same graphic charter as the game, that is to say very colorful, with lots of patterns!

What are the Anim Kools in Fall Guys?

Kool anims, like outfits, are a way to personalize your character. This time it's not about visual customization, but about action. The kool anims are emotes and celebrations, i.e. dances or actions that you can assign to your character, to then do during your game.

Audio Video Outfits and Anim Kool in Fall Guys, what are they and how to unlock them?
Far Cry 6 shock therapy, how to complete the mission? ❯

add a comment of Outfits and Anim Kool in Fall Guys, what are they and how to unlock them?