In this section of the Monster Hunter World Walkthrough, we will explain how to calculate the damage of your weapon and know which one to craft according to your play style. Each weapon has its own damage range called “True raw” (picture1). Example : 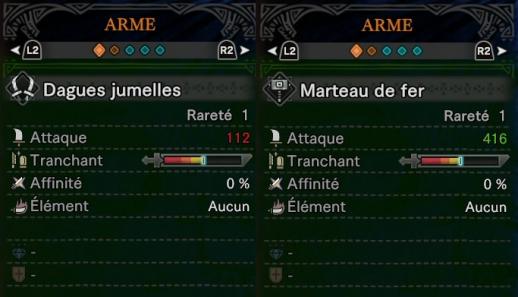 The actual damage of your Monster Hunter weapon:

One could therefore think that the Double Blade is less efficient than the Hammer. Except that the damage is calculated with the help of a damage multiplier. Below is the multiplier table for each weapon:

Don't be afraid when you see this painting. The last column is the most important, it allows you to know the multiplier of your weapon. To stay on our example, here is the actual damage that the Double Blade and the hammer will inflict:

The two weapons will therefore be equivalent in terms of real damage.

This multiplier will then influence the way you choose to improve your weapon. In Monster Hunter World, you have the choice between:

To continue with our example, a Dual Blade will deal less damage but hit more often. The Hammer will hit less often but do more damage. It is therefore more interesting to craft a Double Blade with elemental damage. Why ? Because the elemental damage is influenced by the multiplier of your weapon.

If a weapon gives you +20 elemental damage, each hit of the weapon will affix its elemental damage (modified by the multiplier) in addition to its raw damage. However, a Dual Blade will hit more often than a Hammer.

Don't forget either that the affinity rate (critical hits) as well as the sharpness of the weapon is very important. It will allow you to significantly increase your damage to a monster.

But what about Longsword and Insect Glaive weapons that are between 3.5 and 3.0?

These weapons are hybrids, a longsword can both be efficient in raw damage but also in elemental, just like the Insect Glaive. It's up to you to choose according to your opponent, your way of playing... You will find below a summary of the way in which you must improve your weapons.

The end is near