Associated quests: “For the Republic, Part 2”, “Honeymoon” and “Render to Caesar”

Talk to Papa Khan about his alliance with the Legion (or Karl if you don't know about the alliance) (Picture 1) then ask Regis, his son, to give you his opinion on the NCR. Then get out of Papa Khan's house to receive this quest from Regis (Picture 2). Your objective is now to derail the alliance between Caesar and the Khans. 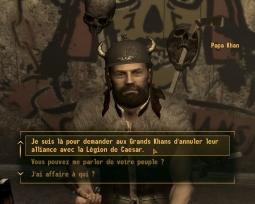 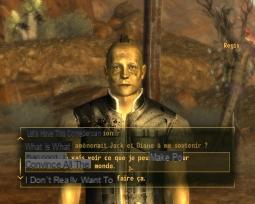 For starters, you can try to discredit Karl, Caesar's emissary, in the eyes of Papa Khan. To do this, you can retrieve Karl's diary from the locker room in his room (Image 3) and then show the contents to Papa Khan (Image 4). You can also push Karl to his limits in order to make him crack (Image 5). Either way, the Khans will eliminate Caesar's man.

Now you have to convince the rest of the tribe, so go to the drug lab in Red Rock Canyon and talk to Diane (Image 6). To convince her to support you, you will have to complete the quest " Honeymoon ". Refer to the corresponding section of the walkthrough for more details. Once Diane is on your side, travel to Sloan (Picture 7) and cross Quarry Junction to wait for the Khans' camp (Watch out for Deathclaws!). At your destination, speak with Melissa and explain to her what the Legion has in store for women to convince her not to support the alliance (Picture 8).

The final item you need can be found at the very heart of Caesar's Fort. To get your hands on it, enjoy the quest "Render to Caesar" to safely infiltrate the lair of the beast. Once at the fort, go to Caesar's tent (Picture 9) and retrieve the slave register placed on a table on the left (Picture 10). To leave, you will have to speak to Caesar and complete his first task (Image 11).

Back in Red Rock Canyon, give the ledger to Regis (Picture 12) then ask Papa Khan to cancel his alliance with the Legion. You can then convince him to follow another path by looking for information in the origins of his clan (Picture 13). So go to the Freeside Mormon fort and speak with Julie Farkas to find out where you can find information on the Great Khans (Picture 14).

You will learn that the only one who can help you is a disciple named Ezekiel. Visit him at Trading Post 188 (Picture 15) to give you a book on the Mongol Empire (Picture 16). All you have to do now is give the book to Papa Khan to convince him to take his clan out of the Mojave (Picture 17).

If you work on behalf of the NCR, you will probably want the Khans to support the republic during the battle of the dam, for that, propose an alliance with the NCR to Papa Khan (Picture 18). Following his categorical refusal, ask Régis his opinion on the NCR to obtain a new objective (Image 19). 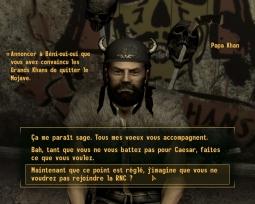 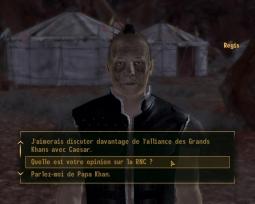 Return to the Hoover Dam and explain the situation to Colonel Moore (Picture 20), she will suggest that you get rid of Papa Khan in order to put Regis at the head of the clan. Return to Red Rock Canyon and infiltrate Papa Khan's room at night in order to assassinate him (Picture 21). Regis will then become the leader of the Khans and you can arrange an alliance between his tribe and the NCR (Picture 22).

Alternative outcome: Don't kill Papa Khan and let him leave the area with his clan