Author and references
The Reds striker scored a brace against Southampton on Saturday. Of all the reasons a player needs to be kicked out of a FIFA 22 tournament, having Premier League commitments might be one of the weirdest of them all, which is exactly what happened to Diogo Jota.

The Portuguese striker who currently plays for Liverpool is a fierce contender for FIFA, often topping the FUT Champions rankings, even securing 1st place in February for a 30 match unbeaten streak.

In fact, the 24-year-old started Diogo Jota Esports to sponsor top players while representing the organization himself. Unfortunately, on November 27, his blossoming FIFA career suffered a minor setback. Unable to make the Global Series Qualifiers due to Liverpool playing Southampton, Jota was forced into DQ.

The news went viral after his opponent shared a screenshot of the message exchange between him and Jota, who revealed he must have missed the game taping as he was in a rush to get to Anfield , the home of Liverpool.

Jota held a 1-2 record at the time and were looking to qualify for the FGS Europe West qualifiers. Unfortunately, his absence from the decisive fourth game earned him a record of 1-3 DNF (Did not finish).

His near-elimination was quickly forgotten as the striker helped Liverpool to a comfortable victory over Southampton, scoring a brace in a 4-0 defeat.

His first goal celebration was a direct reference to his playing past. Jota sat down on the pitch and mimicked holding a controller with his hands as if he was at home playing the qualifying game.

B/R Football @brfootball Diogo Jota spent his morning playing an international qualifier for FIFA 22. He had to leave the tournament early as he played at Southampton at 15pm. He scored after 97 seconds, hit a FIFA celebration, then added another goal in the first half? https://t.co/ubhCz1Ry3e 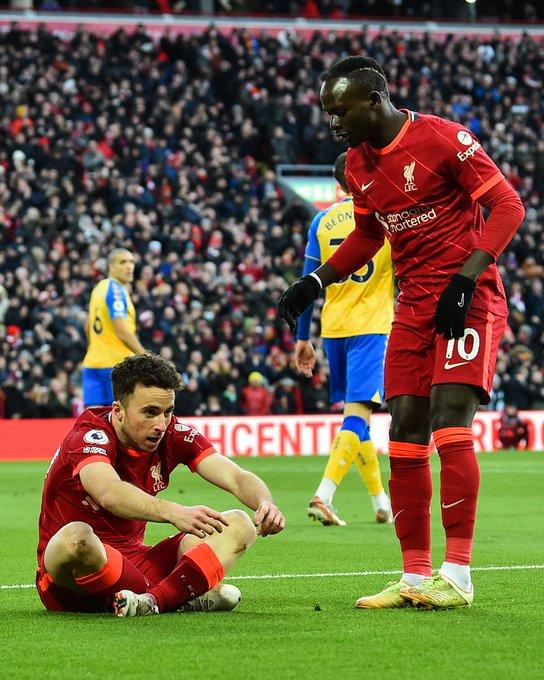 Maybe next time the Premier League will be a bit more accommodating to those with tekkers both on and off the pitch.

Be sure to follow our dedicated FIFA 22 page for all the latest EA Sports releases. We'll be sure to let you know about all the Squad Player Challenges, SBCs, and Objectives.