Night City is a brutal and unforgiving place in the world of Cyberpunk 2077. If you are caught off guard by a group of enemies, you can die very quickly even if you are armed to the teeth. That's why it's crucial to have a deadly and effective arsenal of the best weapons. This legendary pair of Mantis Blades ranks very close to the top of the best weapons in the game.

Usually the downside of melee weapons in games like Cyberpunk 2077 is that they don't do damage fast enough to be worth getting into enemy fire range without cover. Katanas are great because of their speed – but what if there was something even better?

Before I found this free pair of Legendary Mantis Blades, I didn't use melee very often. You have to sacrifice one of your gun slots to a melee weapon, which limits your options overall, and unless you have a clear path to an enemy or can easily flank them , it is impossible to rush for melee strikes.

As flashy as katanas are, they're just not a practical choice. I generally prefer a close range shotgun in most cases. 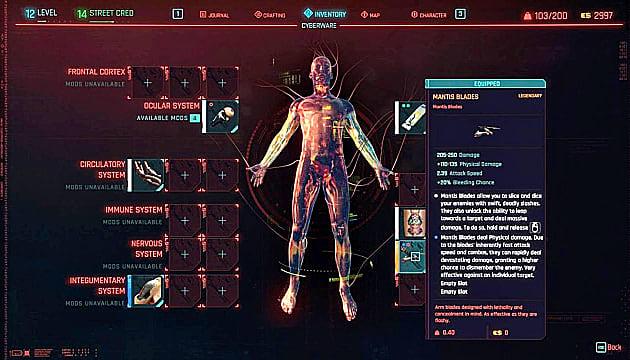 But the mantid blades solve all that. Not only are they insanely fast and powerful, but they're also considered a type of Cyberware sitting on your arms at a Ripperdoc's - not a slotted melee weapon. In the weapon wheel, they replace your hands, so you can still fill your three weapon slots with guns.

Additionally, if you hold down the attack button to charge a heavy attack and release it when facing an enemy, you can charge a good XNUMX yards to close the distance.

For many weaker enemies, this is just a one-hit kill. And for those it doesn't kill outright, you can follow up with several quick strikes that stun enemies and destroy their health like nothing. The power to kill is frankly ridiculous.

Fortunately, finding these blades is incredibly easy. I only tried to locate them after the Prologue once the game “officially” started, but they should appear as soon as you can access them. I tested on a lower level character and they were there, but I originally found them when I was at level 11.

Start by locating downtown Corpo Plaza on your map as shown in the screenshot below. The blue slider box is just above the City Center circle in the middle of the screen.

From there, zoom in a bit and bring your cursor to the northwest. You should see an exclamation mark indicating an event. This particular event is for a very, very powerful high level enemy that you don't need to fight; they spawn right near where you can get the Mantis Blades.

Meet at this location, located down an alley next to the Night City Center for Behavioral Health, and around the corner. On the right wall, you'll see a loot box containing a bunch of mostly random super gear, except for Mantis Blades. These will still appear there.

You don't need to fight enemies here. Instead, you can just dash in, loot the box, and immediately flee until they stop chasing you.

Now all you have to do is go visit a Ripperdoc and have them install the Mantis Blades on your arms, like in the Cyberware image at the top of this article.

The nearest Ripperdoc is west of your current location. In the map screenshot above, it's the white scissors icon near the blue map marker on the left edge of the city. However, everything Ripperdoc is fine.

Now that you have those mighty Mantis Blades, you should be able to smash your way out of any sticky situation. I know it made a big difference for me in terms of my confidence in combat scenarios, even though I'm overwhelmed. For more on Cyberpunk 2077, check out our bounties and street crimes guide and visit our gaming hub for the latest news.