How to get the 66 Dokkan Battle tickets?

Author and references
Our articles on Dokkan 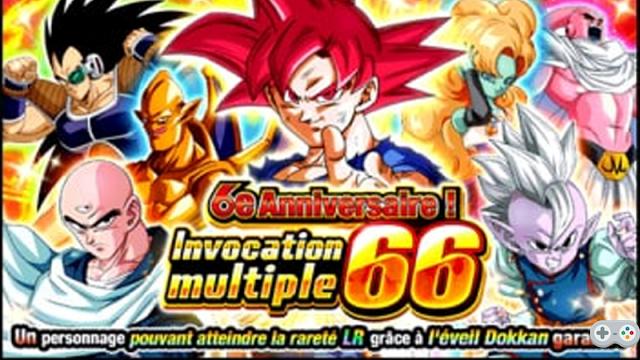 The Dragon Ball Z game: Dokkan Battle is currently celebrating its 6th anniversary, and for the occasion, there are many events in the game! It is thus possible to obtain many rewards, whether through missions, or simply by logging into the game.

Among these rewards, one of the events offers win 66 tickets, serving to recruit a total of 66 characters in your team at once. We explain to you how it is possible to obtain these 66 tickets in Dokkan Battle!

66 Dokkan Battle tickets, how to get them?

The 66 tickets allowing this multiple invocation are obtained as follows:

In total, by completing all the special missions, you will win these 66 tickets! We will therefore have to be patient, since part 2 of the event has only just begun, and part 3 will certainly take several days or weeks before being available.

It is very interesting to win these 66 tickets in Dokkan Battle, since in this multi-summon it is guaranteed that one of the SSR characters will be able to reach LR rarity ! It is also possible to perform multi-summons of 66 characters with 250 Dragon Stones.

You will have until the end of the event, August 9, 2021, to try to obtain the necessary number of tickets!

Audio Video How to get the 66 Dokkan Battle tickets?
How do I get a 10 euro voucher in the Epic Games Store with the creator recognition event? ❯

add a comment of How to get the 66 Dokkan Battle tickets?