How to earn lots of gold in Clash of Clans

In clash of clans the most interesting league to earn a lot of gold and the GOLD league. I advise to be in OR II.

Make sure you get placed in this league, it's a league with a lot of resources.

You will sometimes find villages abandoned by players who have stopped Clash of clans, villages full of gold just waiting to be looted. Once well placed in the league we will prepare our troops.

Fill 2 of your barracks with barbarians and the other 2 with archers. It is important that your archers and barbarians are of a good level to make your attacks effective and to gain a lot of resources.

2Choose the village to attack

First look at the resources you can earn.

If the loot looks good to you (for my part I only attack when at least 200K gold are in play) look at the gold reserves if these are empty then the majority of the gold will be in the mines.

It is possible to earn a lot of gold by attacking only the gold mines.

For example if a village can earn you 300 gold and the reserves are empty: 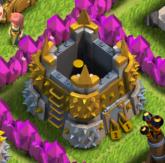 And the mines are full:

So most of the gold will be in the mines and you can easily pick up over 200 gold.

On the other hand, if the reserves are empty:

So the majority (see all) of the gold will be found in the reserves which are often more difficult to reach than the mines and if the village has good defenses compared to your troops, abandon the idea even if the temptation is strong.

Your troops are ready you have found an interesting village whose mines are full of gold, all you have to do is help yourself.

Send a line of barbarians to attack the mines and just behind send a line of archers. Barbarians will take damage and Archers will be shielded and able to deal damage.

When your barbarians start to lose a lot of life then send back a line of barbarians and so on.