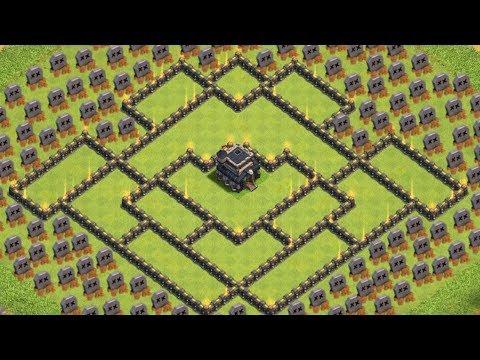 You just got your hdv 9 in clash of clans. You want to have the best village possible and you don't know where to start, then this tutorial is for you!

Finally, after 10 long days of waiting, it's here! Your HDV 9 is all beautiful and its advantages are numerous on clash of clans! The possibility of having 2 ARC-X, the queen of archers and so on!

As with all changes to a new HDV, start by building everything new (defense, reserve, etc.)

Now that you have all the buildings, I invite you to take model on construction of villages and strategies for hdv 9. Or to create a personalized one, it's up to you.

-Send a worker to the laboratory directly as usual, then another worker to the new elixir reserve in order to be able to store a maximum of 6 million elixirs which will give you access to level 6 archers.

-To increase your attack power in clash of clans it is important to upgrade your camps, so send a worker who will take care of maximizing all the camps.

-Very important to improve your queen quickly, you absolutely have to maximize your dark elixir drills, so you send a worker to take care of it.

-It is also necessary to maximize its ARC-X quickly, a worker will take care of this task.

You have completed or will soon complete step 1 of this clash of clans guide so you can start this step.

-The worker who takes care of the laboratory switches directly to the queen to upgrade her.

-A worker switches on the spell factory, you will unlock the jump spell which can be handy in the farm with the goblins.

- We do not forget the King of the Barbarians that we will increase until maximization.

- Once the spell factory is finished, the worker will go straight to the wizard towers until maxed. Wizard towers in Clash of clans are one of the best defenses in the game, so don't forget this step of this Clash of Clans guide.

- The clan castle worker will go on the mortars to the highest level. The mortar in clash of clans will allow you to kill groups of archers of the same level as him in one shot.

Very often you will not have enough dark elixir to increase your heroes in this case one of the two will increase the anti-aircraft defenses.

3Last step to have the best HDV 9

Here you are at the last step of this tutorial Clash of clans for HDV 9  ! Your village must start to be impressive!

You must therefore maximize your defenses (even if you have already started).

In order you will have to improve the x-bows at first, the wizard towers, the mortars, the anti-aircraft defenses and the teslas.

When you farm well keep a worker on hand so you can improve your ramparts!

If your 5 workers work non-stop, you will have maxed out your hdv 9 of clash of clans after 1005 days.

And here you have the best hdv 9 possible clash of clans! Now arrange it as you see fit but you can take inspiration from these plans too.

Audio Video Have the best village hdv 9 in clash of clans
Babidi is back! ❯