In this part of the solution Dragon Ball Z Kakarot, you will discover the complete progress of the Frieza Saga - Episode 8.

Awakened anger
After a new scene, Son Goku transforms into a Super Saiyan, and the confrontation against Frieza's final form resumes (picture1). Son Goku is very powerful in Super Saiyan, so the first part of the fight will not be very difficult. 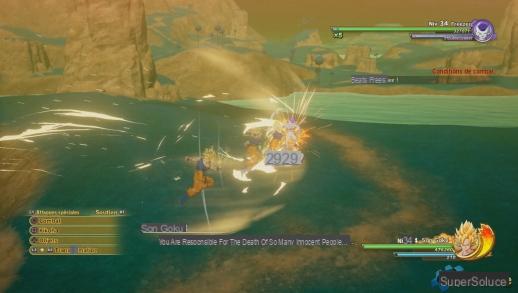 The Legendary Super Saiyan
For the second part of the fight, Frieza reaches his maximum power. As usual, stay away from him when a red aura surrounds him (picture2). Pay close attention to his Death Ray (picture3): be prepared to dodge or stay out of the red zone.

When an animation starts (picture4), quickly rush on Frieza and hit him relentlessly to cancel his attack (picture5).


During another animation, he throws several energy balls at you (picture6), often followed by a Death Ray or a Death Slash (picture7).

Interlude
You are now free to explore the areas. Take the opportunity to take care of the many secondary stories: A cool guy, Yamcha: the man, the myth, the legend, Villager attacked, The mystery of the missing tail, The pride of the warrior race, Saiyan power, The power, It's Justice!, The Beauty of Power, Integrate the Ginyu Commando, and thus collect several Soul Emblems. It is now possible to collect Dragon Balls in order to grant a wish: see our Getting started in Dragon Ball Z Kakarot section to find out more.

As soon as you are ready, go see Chichi in Son Goku’s house to move on to the next saga (pictures8and9).