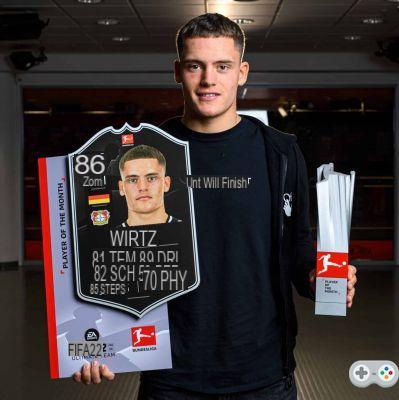 The Bayer Leverkusen attacking midfielder started the season on a flyer and his performances in September earned him the player of the month award.

At 18, Florian Wirtz has the world at his feet, the attacking midfielder came on strong last season, filling a Havertz-shaped hole at Bayern Leverkusen, and if he continues to play at the level he did in September, it won't be long before Leverkusen fans forget about the man he replaced.

The tricky midfielder is an attacking force, with big feet and an eye for goal (remember anyone?), and his performances and goals helped Leverkusen to joint second in the league points with Bayern Munich.

It was enough for him to receive the September player of the month award and now FIFA 22 players can get an upgraded POTM card, available through a Squad Building Challenge (SBC), and thankfully it's nothing like the one in C Ronaldo. SBC monster.

An unforgettable month for Florian Wirtz?

The card is a beast, 86 OVR, and with insane dribbling, passing, and shooting stats. Coupled with some very tasty pace numbers (86 acceleration and 77 sprint speed) and you have all the makings of a great attacking midfielder.

If you want to get your hands on him then we've got you covered, our SBC guide will show you how you can get him into your Ultimate Team for the cheapest possible amount.

You need to complete two SBCs to get Wirtz, with their own requirements and rewards.

Here are the solutions for both.

Notes: All prices are courtesy of FUTBIN and subject to change.

This team will cost between 16-18 coins depending on the platform.

This team will cost between 35-39 coins depending on the platform.