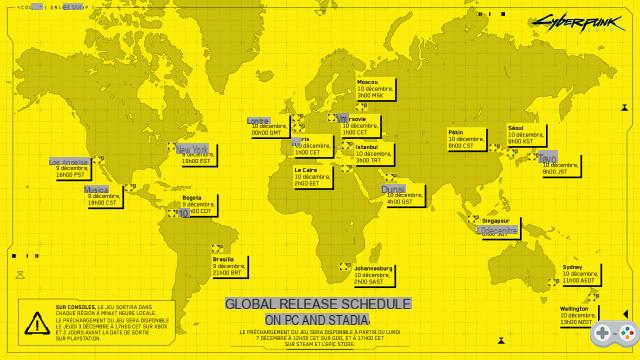 One of the most anticipated games of all time has finally arrived; that's right, Cyberpunk 2077 is almost upon us. Are you ready to dive into this majestic world created by CD PROJEKT RED, who brought us the Witcher trilogy! What could be better than fighting alongside Keanu Reeves!

Cyberpunk 2077 will be released on December 10 on PC, PlayStation 4, PlayStation 5, Xbox One, Xbox Series S/X, and Google Stadia. Due to the simultaneous launch of the game worldwide, you should be able to start the game at midnight local time if you are from the UK.

Anywhere else, depending on where you are, means you'll be able to play Cyberpunk 2077 earlier on December 9! However, the release time and date depends on whether you are playing on PC or console.

The title has been delayed several times, and this time it's 100% official (hopefully) that it won't be changed again!

Cyberpunk 2077 release time depends on your time zone. If you're one of the lucky ones, you might be able to play Cyberpunk 2077 a day earlier, as it's releasing simultaneously across the world. As the version is based on GMT time which means other time zones will get the game sooner!

Below is a list of time zones with the time Cyberpunk 2077 is allowed to release:

Depending on the console you purchased Cyberpunk 2077, you may need to wait until midnight local time to start playing your copy of Cyberpunk 2077.

On PlayStation 4 and PlayStation 5, players will have to wait until midnight, as has always been the case with digital versions on the PS Store. However, if you're playing on Xbox, there are no restrictions, so you'll be able to play the game the second it's released in your time zone.