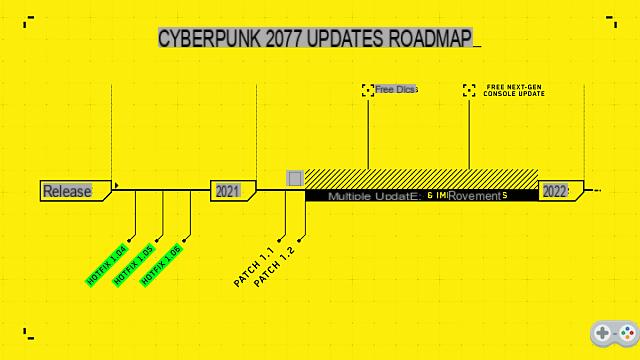 Cyberpunk 2077 DLC and next-gen upgrade is pushed back so CD Projekt Red can make the game playable on PlayStation 4 and Xbox One.

CDPR co-founder Marcin Iwinski outlined changes to Cyberpunk 2077's content roadmap and provided a vague timeline for when the game's promised patches might drop (they're different from patches that have already been released). published).

Cyberpunk 2077's next-gen upgrade won't be released until the second half of 2021. That means that until then, PlayStation 5 and Xbox Series X | S will have to stick with the slightly improved version of what works on the latest generation consoles.

Once the Cyberpunk 2077 next-gen free upgrade launches, it will still be free and will include features like ray tracing and improved frame rates.

Dear players,
Below is the CD PROJEKT co-founder's personal explanation of what the days leading up to the launch of Cyberpunk 2077 were like, sharing the studio's take on what happened with the game. on older consoles. pic.twitter.com/XjdCKizewq

While Cyberpunk 2077 DLC was planned shortly after the game's release, Iwinski said CD Projekt Red's new goal is to release it sometime later in 2021, again focusing on fixes for the releases. current game.

The Cyberpunk Content Roadmap CDPR provided via a blog post on Cyberpunk.net and seen in the tweet above does not have a specific time tag, although the DLC is on the way before the next-gen upgrade.

Assuming these current timelines hold, which might be best taken with a grain of salt, Cyberpunk 2077 owners can presumably expect DLC later this summer.

However, Iwinski only mentioned the game's free DLC, and it's unclear if Cyberpunk 2077's meatier DLC campaigns also fit into the same timeline. It's likely that CDPR's original dates for these have also been pushed.

The first of Cyberpunk 2077's most significant patches will be released sometime before January 23, 2021, with the second following soon after, although Iwinski didn't provide a definitive date for this one. Stay tuned.