Cyberpunk 2077 Endings Explained: How to Get Every Ending

There are multiple Cyberpunk 2077 endings you can unlock based on key choices you make during gameplay - and especially at the end. This naturally begs the question, "How do I unlock all endings in Cyberpunk 2077?"

Fortunately, we have the answer! While we'd avoid getting into heavy spoiler territory with our Cyberpunk 2077 endings guide, a few spoilers are bound to happen, so be careful below.

Really: if you don't want to be spoiled for any of Cyberpunk 2077's endings, stop reading now.

The life path you choose in Cyberpunk 2077 has no bearing on your end. Each ending begins with the Nocturne Op55N1 mission, and you'll know you're starting it because the game lets you know it's the point of no return.

Cyberpunk 2077's endings are unique in that, with the exception of one "secret" ending route, you can actually go back and experience more than one. Completing an ending sends you back to the point of no return, so assuming you've played your cards right with Johnny, you can potentially see every ending without restarting the entire game.

Cyberpunk 2077's bad ending is simple and completely avoidable. After starting Nocturne Op55N1 and you choose to speak with Johnny Silverhand on the balcony, choose:

The ending doesn't solve anything or help anyone, so we don't recommend doing this. You know it's the bad ending because you don't even get a trophy or achievement.

Where is my Mind? The correct ending

Where Is My Mind is Cyberpunk 2077's second bad ending - or bad-ish might be more appropriate as it offers some closure. It's for those who haven't developed a good relationship with Panam, Rogue, Johnny, or anyone.


The main requirement for this one is to save Takemura in the Search and Destroy mission. Then, once Nocturne Op55N1 starts, go out on the balcony with Johnny and choose:

You'll then have three more missions to complete, where V rescues Hanako Arasaka, invades Arasaka Tower with her, and ends V's estranged relationship with Johnny. This ending does not allow you to spend more time in Night City, unlike other better endings.

Throughout the Watchtower: Cyberpunk 2077 Good Ending (1)

One of Cyberpunk 2077's best endings is All Along the Watchtower. It's also currently the hardest to get, but not because of the gameplay.

Players report that at a key moment in the ending, the game tells V they're out of bounds and blasts them. Presumably, this rather serious bug will be fixed once CD Projekt Red releases its next patches in the coming month.

For now, if you want to try the best ending, this is it and could be one of the canonical endings, depending on the Cyberpunk 2077 DLC we get.

Here's what you're going to do.

You'll need to complete all Panam quests first. Then, once Nocturne Op55N1 starts, choose the following:

This starts a new chain of events. You will then complete these quests with Panam and the Aldecaldos:


During Belly of the Beast you need to defeat Adam Smasher and interact with Alt. Here's where the ending actually splits.

To get All Along the Watchtower, you must choose "I want to live the life I have left." This launches Johnny and sends V with Panam and the Aldecaldos to find a cure. We'll get to the other branch in a moment.

Cyberpunk 2077's second good ending is Path of Glory. For this route, you must complete all Rogue quests and have a good relationship with Johnny Silverhand.

Once Nocturne Op55N1 starts, choose these when talking to Johnny on the balcony:

Johnny takes over V for now and works alongside Rogue in upcoming missions:

Like All Along the Watchtower, you must defeat Adam Smasher in the final mission and interact with Alt. You must choose to enter the pit and return to life to unlock Path of Glory.

In this ending, V succeeds Rogue as head of Afterlife and becomes Night City's legendary mercenary. 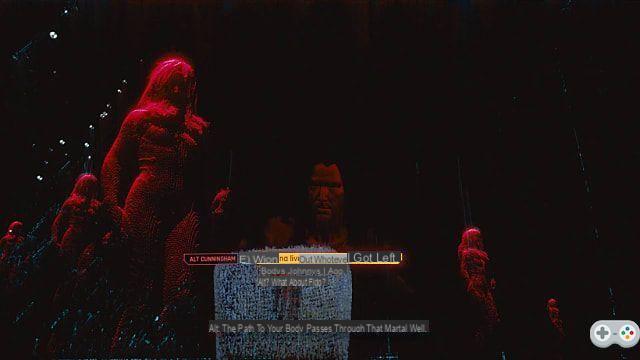 New Dawn Fades is a radically different ending that separates both All Along the Watchtower and Path of Glory. Either way, you have to go to where you interacted with Alt and have the choice of going through the well or letting Johnny take over.


Let Johnny take over as this is his body and you need to return to Night City to clear up some missions. The construct known as V ends up merging with Mikoshi, while Johnny takes V's body on a new adventure. It's a different type of resolution, although it's not yet known if it's canonical.

Cyberpunk 2077's secret ending is (Don't Fear) The Reaper. At least, we think so. There may be more secret endings, but this is the one we know for sure right now. It is the most difficult and probably the most rewarding path, even if it is a journey like the reward.

The most important condition is that you must be good friends with Johnny, with a friendship rating of 70% or higher.

Choose kind, or at least not jerky, responses when you can interact with him during the story, and don't opt ​​for flattery because he won't like it.

From what we know of this route, you will also need to complete these missions:

During Chippin' In, you'll visit Johnny's grave and have to choose the following answers:

Some of these steps may not be necessary, but most players say this is the only surefire way to unlock the Reaper quest during Nocturne Op55N1.

So, once Nocturne Op55N1, go out on the balcony as usual with Johnny. This time, do nothing. When prompts show up to choose an action that would lead to a different ending, do nothing at all.

After five minutes of inaction, Johnny finally shows up and offers to carry out the mission alone.

Finish hearing his plan and choose “Arasaka Tower”. This opens the quest (Don't Fear) The Reaper.

Johnny takes over V and attacks Arasaka Tower entirely alone. It's not a case of dying and trying again either. Die in this quest and you are kicked out of it, forced to choose another route. For this reason, it's best to run it on a separate save file so you can try again if you want.

At the end you have the option to do New Dawn Fades or Path of Glory.

That's everything you need to know about all of Cyberpunk 2077's endings, but be sure to check out our other Cyberpunk 2077 guides to make the most of your time in Night City.

add a comment of Cyberpunk 2077 Endings Explained: How to Get Every Ending