In this part of the walkthrough Dragon Ball Z Kakarot, discover the complete progress of the Cell Saga - Episode 10.

Son Gohan pushes his limits
You play as Son Gohan again. Approach Cell to face him again (pictures1and2). The fight is not much different from other clashes. Just remember to rush at him and hit him when he prepares his Kamehameha (picture3).

The Father-Son Kamehameha
After a long scene, Cell returns and you have to defeat him one last time with Son Gohan (picture4). 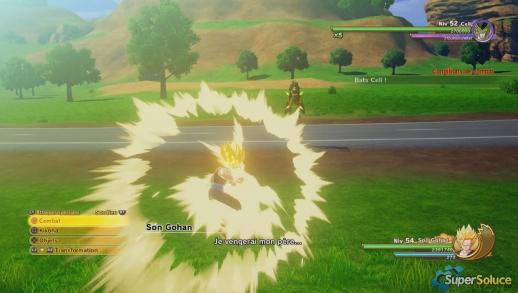 Cell will use new attacks. He will regularly throw you (picture5): get ready to dodge his rush (picture6).

It will also split (pictures7and8). Quickly eliminate the duplicates, then resume the assault on the original.

Also, as for the previous fight, hurry to hit Cell when he prepares his Kamehameha (picture9). 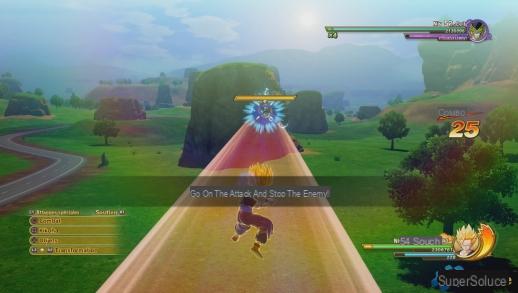 
Finally, when Cell prepares his punitive storm (picture10), get ready to repeatedly dodge the energy balls he spawns (picture11).


Interlude
Now that you've defeated Cell for good, you can explore the world freely. Take the opportunity to take care of the sub stories Villager often attacked and The mad scientist. Then go to the Divine Palace (picture12), and chat with Piccolo (picture13).

You must now go to Capsule Corporation to ask Vegeta to train you (pictures14and15).

After beating Vegeta (picture16), return to the Divine Palace to find Dende (picture17).

After the scene, go to the southeast islands area, then follow the marker south of the area (picture18). Dive to find a wreck, and pick up the Rainbow Crystal (picture19). Give this crystal to Dende who is waiting for you at the Divine Palace (picture20).

Thanks to Dende and the crystal, you can now grant 3 wishes using the Dragon Balls. Take advantage of this new feature to collect all 7 Dragon Balls and to resurrect Kiwi, Apple and the Cell Juniors: this action allows you to unlock the side stories Fill the power vacuum, No vicious fireworks for me! and Little Nightmares. You can also take care of the Funny Duo, Krillin's Bounty, Hall of Spirit and Time Renovations, and Janitor side stories.

When you have finished all these secondary stories, enter Son Goku’s house and speak with Chichi to move on to the next saga (pictures21,22and23).