Author and references
Our articles on Brawl Stars Brawl Stars: Survivor, game mode guides Do you want to know everything about Survivor mode in Brawl Stars? Follow the leader !

While the mode Gem Raid is Brawl's first permanent game mode, the mode Survivor is the second (rotating with its modifiers). It is also the one with a unique feature: you can either play it solo or as a duo, which will offer a small variation in the rules. As for the Gem Raid, we are going to give you the rules, the size of the cards (with a link to consult them) and 2 tips to better get out of it. However, we will also discuss the modifiers (in addition) that this game mode may experience (periodically).

- You win by being the last to survive.

- The map shrinks during the course of the game (with a poison that does 1000 damage per second).

- Death is permanent (there is no reappearance).

On the map we can also find boxes that give us points that we can collect. Each point gives 10% more damage and 400 hit points and the more points one has, the more these bonuses accumulate.

When you kill an opposing Brawler, you earn points according to the number who have them, knowing that we add 1 for every 3 points that have been picked up. Therefore, you win 1 point when your opponent has between 0 and 2 points, 2 between 3 and 5, 3 between 6 and 6 etc...

As a duo, you should know that as Fortnite, death is not completely final. Indeed, for a duo to be completely eliminated, both players must be eliminated within a period of less than 12 seconds. If one of your teammates manages to survive long enough (or yourself), they will respawn.

As for the points, they are duplicated, so that if a point is collected, it also goes to the other member of the duo. However, a brawler who reappears on the map loses all of his points.

Unlike the mode Gem Raid, the map is not longer than it is wide: it is square. To be more specific, a Showdown map is 60 squares long and 60 squares wide, which is 3600 squares.

You can check out the maps here, with an example below. The white circles concern the appearance in solo and the green circles in duet. 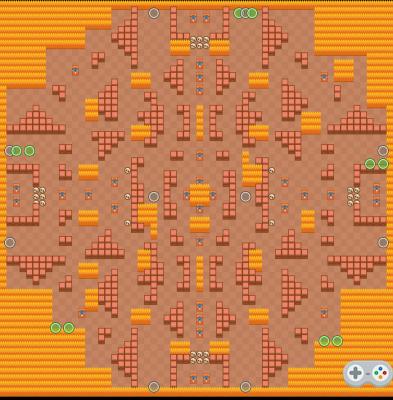 This amounts to adding an additional component to this game mode, to spice it up. The longer the game, the more this component increases in frequency. Here are those that can be found in mode Survivor :

- Meteors : regularly, they fall on the map and do 2.000 damage to those who are where the meteor strikes.

- Energy drink : they appear regularly on the map. To get them, you have to spot a small circle that will show where it will land. If taken, you triple your damage and gain movement speed for a short time.

- angry robot : A robot enters the field and attacks the nearest Brawler. Destroying it gives us several points. As for Meteors et Energy drink, the impact/arrival radius is indicated.

- Mushrooms : Mushrooms appear on the map and when they hatch, they heal you for 1.000 health points in a large radius.

- The first thing you must do when starting your game is to rush to the crates: your opponents will do it and it would be stupid to deprive yourself of an advantage which can be substantial.

- As soon as you see bushes, knock to see if someone is inside. The reason for this is that Survivor mode tends to favor characters who have very high damage at close range, such as Bull for example.