La Gem Raid is the first game mode of Brawl Stars, the one we discuss in the tutorial. Although it is also essential to know the rules of the other game modes, the Gem Raid is surely the one that is most important to understand the ins and outs with the mode Survivor, since they alone are permanent. Therefore, we'll give you the rules, the card sizes (with a link to check them out), and then we'll give you three basic tips to help you get away with it.

You are in a team of 3 players against another composed of the same number. In a map that is longer than it is wide, you will find in the middle a mine of gems who the generate every 7 seconds. At the start of the game, 2 will be available and he cannot have more than 29 gems.

When you kill or get killed by an opponent, all of your gems will be left on the ground until taken by another player. the respawn time after death is 3 seconds and will always be where you spawn at the start of the game.

When a team has at least 10 gems (regardless of the distribution of these), it will have 16 seconds to hold them and if it is done, the victory is for this one. To interrupt this, you have two solutions :


- kill an opponent so that the number of gems possessed by the team falls below 10.

- Have a equal number of gems, knowing that this equality is only taken into account from the 10th. Therefore, if a team has 11 and you pick up an 11th gem for your team, the count stops.

As we wrote, a map of Gem Raid is longer than wide. You should also know that the number of squares is odd : 33 in length and 21 in width, which makes 693 squares in all. You can find them here, but here is what one of the cards in the game looks like. The red and blue circles are where you will appear in the game. 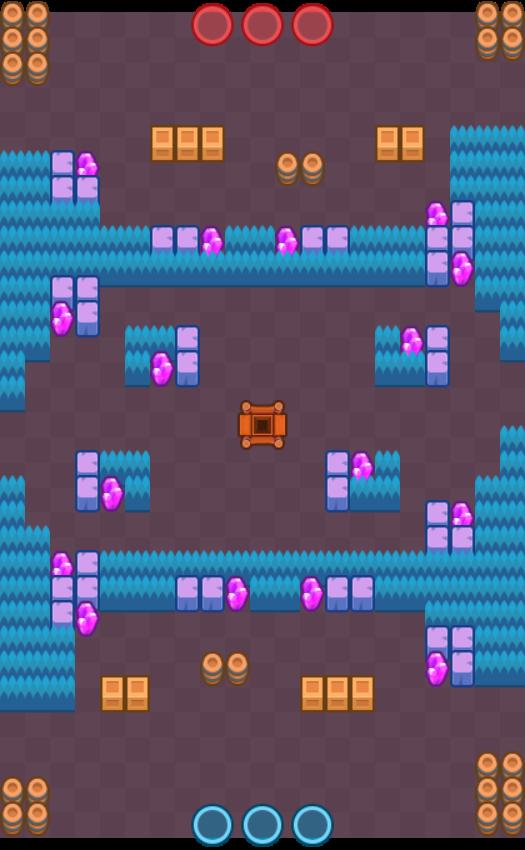 - It is very important to control the mine of gems from the start of the game, then to maintain the advantage as long as possible.

- It is better to leave your gems to a brawler who has a good attack distance and who is not too fragile. As a result, he/she will not be at the front of the fight, while retaining great utility for the final victory. To give examples, characters like Jessie ou Pam can be good solutions.

- It's smarter to leave quickly when you're in the countdown, to your advantage. Indeed, you will naturally place yourself at the back of the map, which means that the enemies will take longer to get to where you are, that you see them coming from further away and that it will be more difficult for them to return the game.