Anthem: The Interceptor, skills and equipment

Author and references
Our articles on Anthem Anthem: The interceptor, skills and equipment In Anthem you can play up to 4 different javelins, among them is the Interceptor, combining speed and precision, it is the most agile and fastest of the javelins.

The Interceptor is arguably the fastest javelin in the game. Quick and agile, the Interceptor doesn't hesitate to dive into the fray in order to sow chaos and confusion among its enemies. The Interceptor has a particularly aggressive and nervous unique gameplay geared around speed and melee combat. The interceptor however has the lowest firepower compared to other javelins but compensates for this weakness with its mobility and speed.

The Interceptor can be equipped with all weapons (except Heavy Weapons exclusively reserved for the Colossus) however, unlike other Javelins, it can only have one weapon. 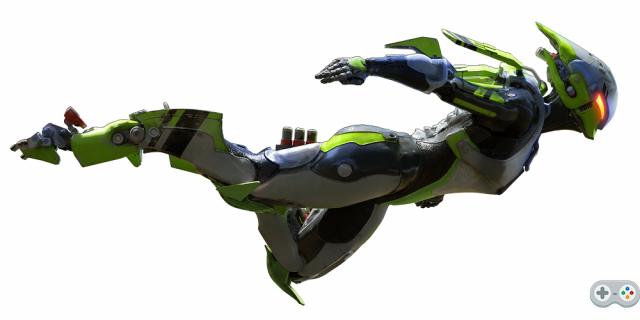 Like all javelins, the interceptor has the option of equipping components that boost its stats and skills.

The assault system has the advantage of being able to be adapted to any situation, so you can use different modules depending on the way you play or the mission you are going to carry out.

→ Venom bombs: Throws a grenade that deals acid damage to all nearby enemies.

→ Cryo Glaive: Targets up to two nearby enemies who will freeze on impact.

→ Fragmentation mine: Launches a salvo of mines at the targeted area.

→ Lightning Rush: Rush forward leaving a dangerous flow of electricity behind you.

The interceptor also uses a striking system, this system offers a wide range of melee skills as fast as they are deadly which will probably require a little practice before being completely mastered. The Interceptor's strike system is undoubtedly its biggest asset but also its biggest weakness as it will force players to expose themselves.

→ Detonating Strike: A melee attack that charges the enemy with electrical energy. If he dies, the enemy explodes dealing damage around him.

→ Spectral Strike: Generates a projection from the interceptor to attack your enemies.

→ Venom Spray: Projects a corrosive acid that deals damage to all enemies hit.

The interceptor, although not very resistant, has several melee attacks other than those present in its various combat systems.

→ Double blades: The Interceptor is equipped with two dual blades which it uses to inflict massive damage by performing multiple acrobatic attacks in a series.

In addition to these many offensive skills, the Interceptor also has so-called support skills, which will protect you (you and your allies) or increase the damage suffered by a target.

→ Target tag: Marks an enemy to allow your allies to deal increased damage to them. 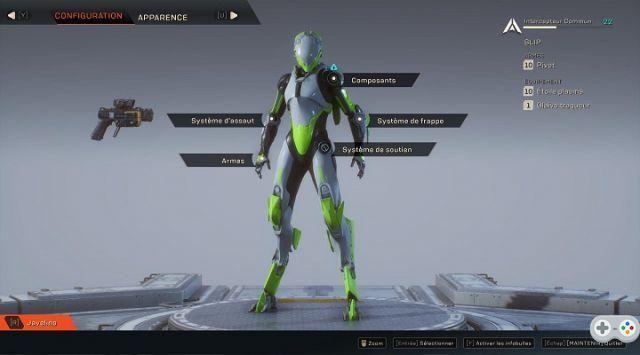 In addition to their basic skills, javelins also have an ultimate skill. As far as the interceptor is concerned, the ultimate skill is none other than a powerful chain of melee attacks with powerful assassin blades which will allow players to pass through enemies while inflicting significant damage.

add a comment of Anthem: The Interceptor, skills and equipment