Everyone plays Animal Crossing in their own way, and a lot of people happen to enjoy playing dress up. Myself included, of course.

While some Animal Crossing: New Horizons players stick with outfits made up of actual in-game clothing, others turn to custom content to pick up some flair or codes to dress like theirs. favorite game or anime character.

In this list, we're going to go over some of the best anime custom designs the New Horizons community has come up with so far. From recent popular series like Kimetsu no Yaiba to classics like Cardcaptor Sakura, there's at least one outfit for every type of anime fan.

There aren't a ton of Attack on Titan signature outfits, but I think we can all agree that's the big one. It also wouldn't be extremely difficult to make you look like Mikasa or Eren.

Honorable mention to the design below, which may suit your aesthetic better. 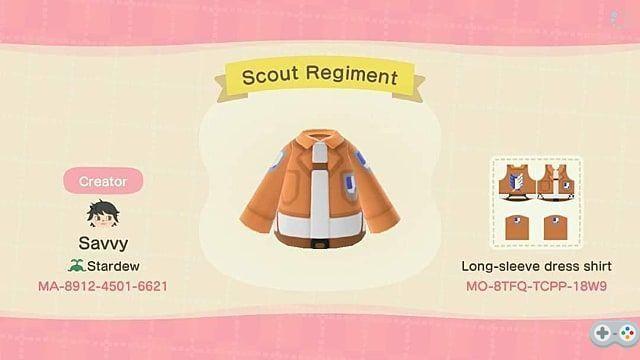 He's only the first of three Yaiba characters on this list, so naturally I had to put my cowardly Zenitsu first. Haori and kimono designs seem to be very popular among the Animal Crossing community.

Below is an alternative from another creator, so pick the one you like best! 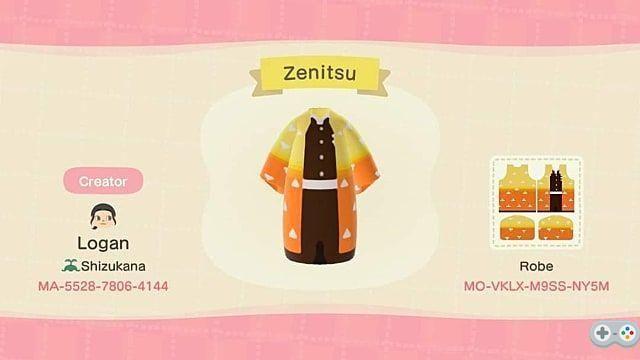 Tanjiro's haori is a signature garment of the Kimetsu no Yaiba series. Chances are if you're a fan, you'll want to download it.

You can also download a template for Tanjiro's scar for the complete look. Get a friend to dress up as Nezuko and travel the world! Well, at least your island. 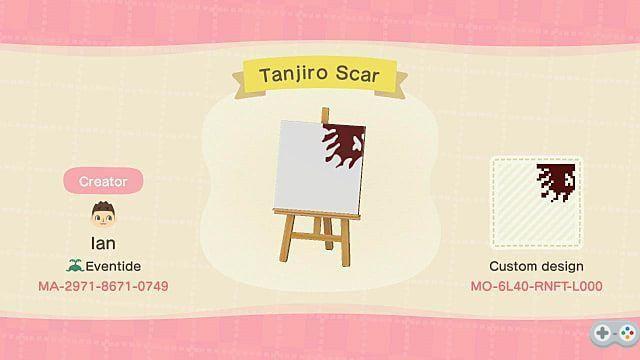 The Nezuko herself is not only Yaiba's mascot, but also one of the most popular characters in the series. Don't we all wish we could just hang out and sleep in a box all day? Maybe it's just me...

This is another one I saved an alternative for, because it's hard to choose one. The bottom one is a little softer, which may be more to your aesthetic. 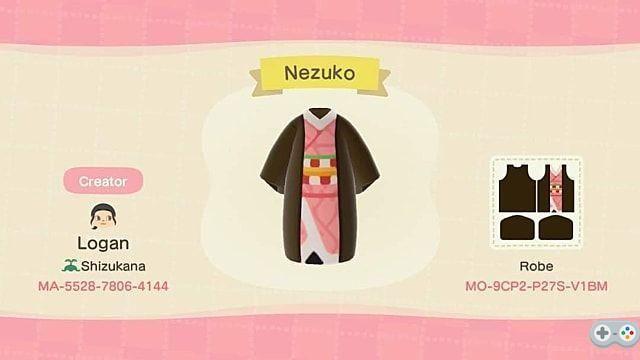 There are so many Sailor Scout outfits that I'm just going to link you to finding "sailors" on Nook's Island so you can browse through them yourself.

You can also find outfits from all Sailor Moon series, from the original and R to S and Super S. outfits for each Sailor Scout – it would be too much to list all the fantastic ones here!

A content creator seems to be very interested in CCS and the clothing found in the series. Check their creator code up there on the left in the picture and check out their other designs. However, any fan needs the school outfit as seen above.

Whether you like the show or the manga or not, this jacket is really pretty and is just perfect for wielding a bass guitar like a weapon.

This is the first of four different My Hero Academia clothing pieces on this list.

Held two. This time it's Shoto's hero costume! Getting his hair and face might not be an option, but you can at least look as cool as Shoto and pretend to use two items at once. It's a decoration idea, maybe?

I'm not saying you're going to blow up any One for All Quirks wearing this uniform, but you may very well feel like you are. Maybe.

This outfit falls short of most of the others listed, but if you're a fan, this is a must-download.

Tsuyu is my favorite character in My Hero Academia series, so excuse me while I share her hero costume with the world and implore you to download it.

You can't quite be Jotaro in Animal Crossing, but you can definitely dress like him. Just without Star Platinum supporting you.


I really love this jacket, but you might not want such a flashy one. Check out the more moderate alternative option below. 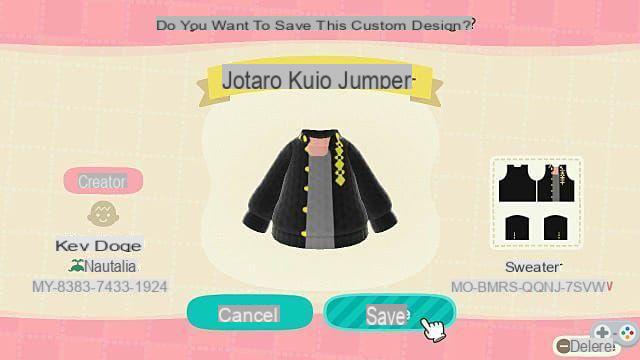 It looks a lot like Saber's outfit in Fate/Grand Order, but if you know Fate, you know this outfit.

There are a ton of dress patterns available to download, but honestly not many like this one. Hopefully there will be more similar styles created, but for now this is a solid choice whether you're a Fate fan or not.

Konosuba is for the most refined anime fans only.

This one's to keep in your pocket for those days when you really want to spam "hai kazuma desu" to your friends in Animal Crossing. Because I do and do.

Extra points for you if another friend wears the next top and says...

Aqua is fine, I guess. But no one blows things up better than Megumin.

I said Konosuba is only for the most polished anime fans of the last slide, right? Obviously, that means people are willing to wear this and spam "EXPLOSION" in Animal Crossing.

I don't have much to say here, but it would be absolutely perfect if someone made a transformed Ryuko top so players could slap that and the transformed top on a wand and switch between them on the fly.

There aren't a ton of Dragon Ball Z outfits in New Horizons yet, but I expect that will change over time and the content creators decide they actually want to look like Goku.

For now, you'll only have to look like the sleekest half-Saiyan: Trunks. Future Trunks, to be exact. It's just a shame you can't carry a sword!

There aren't many Bleach-inspired custom outfits in Animal Crossing: New Horizons yet, though the series is one of what the anime community has come to know as the Big 3 during its run - which means it was one of the top three popular shonen series.

Byakuya's haori are a start, and I hope more will be created and shared.

Hope you're not planning to time travel to New Horizons, but you better wear Kurisu's top if you do. Just, uh, don't ruin it.

How many manga chapters does One Piece have under his arm now? How many anime episodes? A million?

Luffy and his friends have been on an adventure for 23 years. 23 years! It is the best-selling manga of all time. Who would have thought this gummy boy could last this long? My God.

Either you're with Madoka or you're not. If you're not, you should be.

It makes sense that so many magical girl shows are represented in New Horizons' custom content community, but Madoka?

Just don't go and make a contract or anything while you're wearing this.

In the same vein as the Madoka outfit, don't show off fighting witches in this thing. This is bad juju.

We've got all the Big 3 represented here, right? Bleach? To verify. A piece? To verify. It's time for some Naruto to wrap it all up, just as the series itself only returned as Boruto.

I could be old, I don't know. I love Utena, as repetitive and weird as it gets.

The perfect match to this would be a proper Anthy outfit and an island full of roses. Maybe some endless stairs. Maybe a car to transform. You know, normal stuff.

I'm not going to say that I saved the best for last, but I will say that this show is better than all the other shows mentioned. Probably about five miles and a river. Which is really saying something, because most of the anime these outfits are from are really good.

Cowboy Bebop is on a different level, though; and while this top and the alternative below may be less flashy than some of the others on this list, I feel compelled as a fan to download and wear these. You should too.

That's it for our long list of anime-inspired custom designs for Animal Crossing: New Horizons! More outfits are sure to come, but these should please you as the community picks up speed and pumps out some fantastic tops to share with fellow New Horizons players.

I would be very grateful if you would take a look at our list of anime outfits, and feel free to check out one or a few of our many New Horizons guides!

Animal Crossing: Pocket Camp - How to Get Reissue Materials

Animal Crossing New Horizons - How to Catch a Mahi-Mahi

How to get a 3 star island in Animal Crossing: New Horizons?

How to get more storage in Animal Crossing New Horizons

add a comment of Animal Crossing New Horizons Tenues Anime: Cosplay It Up!